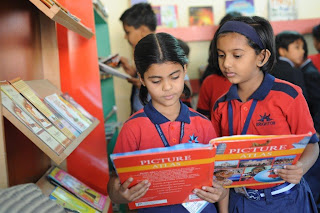 Each of the students are given a book, like a small mostly pictorial in nature along with some text. The student reads it and later is given a worksheet to describe the book in the form of a pyramid.

2. A permanent section in the school student’s almanac

For the entire year we have created a permanent section in the  almanac for the teacher/librarian.Student/parent to track the list of books they have read during the entire year. This is supplemented by a worksheet or by a group discussion after reading each of the book where students talk about the following aspects of the book;
What have they read
Who is the author
The idea in the story
Does it happen in real life

3. A Train journey in the school library

Students are asked to make a train with one behind the other, the librarian become the engine. The train stops at all major landmarks  within the library. Various section inside the library like Newspapaer, Magazine, Biographies, Fiction, Non Fiction, Encyclopedia, General Books, Reference books, Audio Visual corner. This way the students get an idea what is in store for them.

Students are given ideas about fairy tale stories and are asked to go and search the book in the library. Once they have found and read it. They are asked to fill in details on the worksheet which are as follows;

This one is simple, students are first told about the encyclopedias and information stored in them, Students are then divided into groups and each of the group is given an encyclopedia. The teacher throws different question to different question which are housed inside their respective encyclopedia. THe teams have to find the answers, the fastest group wins the contest.
There are many more ideas in terms of worksheet which can be done, but there is also a fear of converting library into another class. Anyway, I hope the librarians can derive some joy out of the activities listed above.
[Contact_Form_Builder id=”2″]
Follow me
Abhiney Singh
Managing Director at Brighton International School
I run a school called Brighton International School (www.brightoninternational.in). I am also now a partner with a School consulting company which helps budding educators or investors start school or gain access to help related to school. The help could be in the form of Turnkey School Consultation, Detailed Project report, Project Finance, Business Plan consulting, Recruitment planning, Infrastructure consultation, Affiliation Consultation, Teacher’s Training, Academic and Curriculum Planning. I now have a decade of work experience. I strongly believe in improving every day and I have tremendous respect for people who pursue their dreams with undying passion and enthusiasm.

Get in touch
Follow me
Latest posts by Abhiney Singh (see all)
Tags:ActivitiesBiographiesEncouraging readinglibrary worksheetsSchool Library