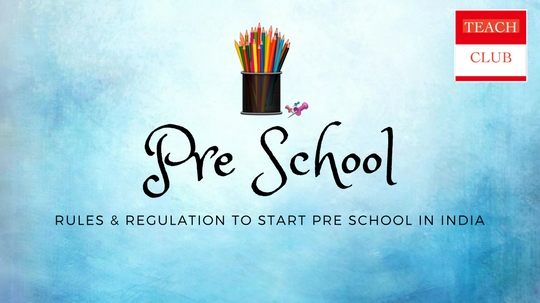 a) No private play school in existence on that date shall, after the expiry of six months from the said date be run;

b) No private play school shall be established without the recognition of the competent authority and except in accordance with the terms and conditions specified in such recognition, as per these guidelines.

(a) The management of every private play school- in existence on the date of the enforcement of these guidelines as per point 3 (a) and of every private play school proposed to be established on or after that date shall make an application to the competent authority for recognition to run such institution or to establish such institution, as the case may be;

(b) Every such application small

i. be in the prescribed form as annexed;

ii. be accompanied by such processing fee as prescribed by respective appropriate Government; and

iii. shall fulfill criterion for the safe and secure environment for children as per the annexed checklist; and the visiting team constituted by the competent authority shall ensure that all points in the checklist are fulfilled by the playschool before granting recognition,

iv. contain the particulars as per the following Norms and Standards,

v. Where a play school is established before implementation of these guidelines, it shall take steps to fulfill the norms and standards within 6 months

(5) Requirement with respect to Name

(a) Every private educational institution coming under the purview of these guidelines shall include in its name the word ‘play school’,

(b) Subject to the provisions of point 5(a) no private play school shall style itself under any name except in accordance with such rules as may be made in this behalf and without the approval of the competent authority.

(a) On receipt of an application under point 4 the competent authority may grant or refuse to grant the recognition after taking into consideration the particulars contained in such application, provided that the recognition shall not be refused unless the applicant has been given an opportunity of making his/her representations.

(b) The procedure of granting recognition.

ii. After shortlisting the proposals, a minimum two-member visit team comprising officials, not below block-level will be formed by the competent authority to visit the site of proposed play school/already established play school

iii. The visiting team will then submit its report in the prescribed format as annexed with these guidelines, to the competent authority. After the receipt of the report, the competent authority, if satisfied that the proposal for recognition fulfills the objects laid down under point 4; may issue a Recognition Certificate indicating the number of seats allotted, within a period of one month of receiving the proposal, to establish the play school in accordance with the provisions of

National ECCE Policy 2013 for a period of one year.

iv. The playschool has to apply for renewal of the Recognition Certificate to the competent authority every year.

v. The competent authority after due diligence will renew the registration only if the playschool fulfill all the basic requirements

(b) The competent authority before granting recognition for closure has to ensure that the children are transferred to any other such play school thereby ensuring the continuity of the session.

The competent authority may, at any time, withdraw the recognition granted under point 6,

(a) If such recognition has been obtained by fraud, misrepresentation or suppression of material particulars or where after obtaining the recognition there is violation of any of the provisions of the guidelines or of any of terms or conditions or findings of inspection under point 22, or of the recognition or of any direction issued by the competent authority under these guidelines at any stage

(c) If the competent authority, after inquiry, finds any violation of POCSO Act, 2012 or J.J. Act, 2015 or any other child-related law or violation of Manual for Safety and Security of Children in Schools issued by NCPCR

(d) Before withdrawing recognition under points 8(a) and/or 8(b) and/or 8(c), the competent authority has to give the management of the playschool an opportunity for making its representation.

Get in touch
Follow me
Latest posts by Abhiney Singh (see all)
Tags:Pre School

10 thoughts on “Rules & Regulation to Start Pre School in India”